Every few months, we read about Pitbull’s biting people. This breed has a reputation of being one of the most aggressive dog races out there. Why do Pitbulls attack people, and does this really happen as often as we’re lead to believe?

One of the common stories any Pitbull lover has heard is the one about Pitbull killing his human companion. Is there truth to this story, and will Pitbull attack owner?

The truth might surprise you. To understand the breed, we need to realize why do Pitbulls attack humans and how often it really happens.

If these topics interest you, keep on reading to learn more. First and foremost, Pitbull, on its own, is not considered a breed. It is a term used to describe several dog breeds with similar characteristics. These breeds include:

As American Pitbull Terriers are dogs mostly mentioned under the simplified term ‘Pitbull,’ we’ll focus on them. However, most information mentioned can be used on any breed under the Pitbull label.

The American Pitbull Terrier, believe it or not, is a family dog breed. They were bred to be a part of bull baiting. Bull baiting was a cruel way of entertaining, where a bull would be tied to a stake.

This would disallow it to walk further than a 30-feet radius. People would put pepper on its nose, agitating it. Then, dogs would be released on the bull until they would kill him.

When this cruel practice was abandoned, Pitbulls were moved to farms. People bred them to be ‘nanny dogs’ because of their affection toward humans, especially children.

However, during the 1990s, dog fights became popular once again. Due to their strength, Pitbulls quickly became ‘fan favorites.’ Ever since then, they are one of the most popular breeds in dog rings.

This probably caused their bad reputation, as Pitbulls became dogs of dangerous gangs. When we wonder why do Pitbulls attack other animals, we have to have this part of their history in mind.

Pitbulls are medium-sized dogs with strong muscles, especially on their chest. They are easily distinguished by their big head and jaw, as well as a ‘boxer’ posture. Pitbulls are born with medium-sized ears that are commonly cut so the dog can look more dangerous. Luckily, this inhumane practice is slowly being banned.

Pitbulls are strong and powerful dogs that need a lot of exercise. They are very determined, to the point of being stubborn. If they want to do something – they will do it, no matter what.

They are known to run away from fenced yards easily. This is why getting a good leash and crate for Pitbull is one of the most challenging tasks for owners.

If you are looking for a dog to cuddle with, Pitbulls might be a great choice. Despite their big size, they will think they’re lapdogs all the time. Due to their strength, we wouldn’t advise leaving a Pitbull with kids at home.

They can easily knock a child over during playtime, or nip at their finger during tug of war. However, Pitbulls aren’t dangerous dogs, and they won’t show human aggression unless you train them the wrong way. If your dog is stubborn try to train him/her with a special dog collar.

If you get a Pitbull, you’ll have to train him the right way. Luckily, they love obedience training, and they are eager to learn. They are suitable for apartments, as long as you spend a lot of time walking them.

Keep in mind these dogs reach maturity quite late – sometimes as late as three years! You may end up with a reasonably large dog with a puppy temperament. For most people, this goofiness only adds to their charm. 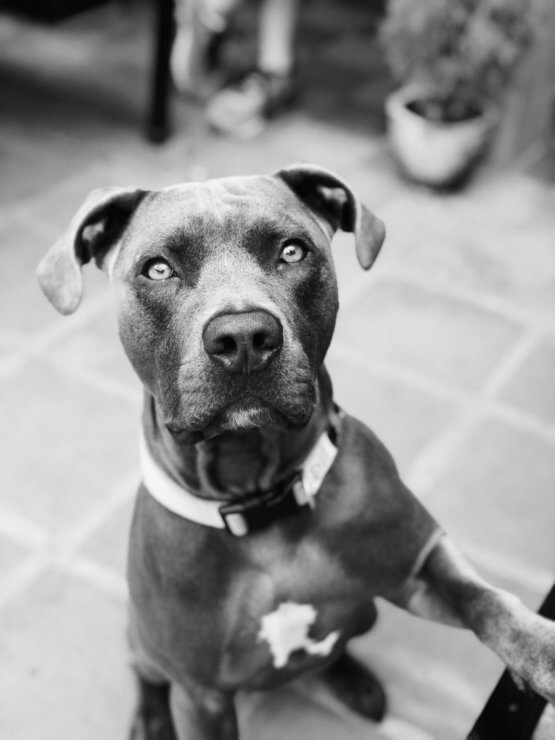 Many countries ban dangerous dog breeds, and Pitbulls are the first ones they forbid. However, Pitbull attack statistics show a different pattern.

According to numerous data, Pitbulls rarely end up above fourth place on the list of dogs most likely to bite. In fact, Labrador and Huskies bite more people yearly than Pitbulls do.

This myth about Pitbulls being bloodthirsty monsters likely comes from their history as fighting dogs. Media spreads images of bloodstained Pitbulls looking for an emotional reaction, which resulted in bad breed reputation.

This doesn’t mean that Pitbulls attack humans more often than other breeds – just that their bites are more effective. In fact, Pitbulls have the 9th strongest bite among all dog breeds. Dogs who have the hardest bite are:

And below them is the American Pitbull, as well as Dutch Shepherd. This is why the number of reported Pitbull attack victims is higher than many other breeds that bite more often.

Pitbulls won’t bite any more often than any other species, but the consequences will be greater when they do.

Why Do Pitbulls Attack?

It is very rare for a Pitbull to attack a human, but, just like with any dog, this might happen. It’s essential to understand why this can happen to any canine.

The most common reason why dogs may attack a human is because they are afraid. This is very common with dogs who have been abused in the past.

A canine who is used to violence can feel threatened easily and become defensive as a response. This is why it’s crucial to raise your puppy the right way.

Always use positive reinforcement rather than punishes. Most importantly, never hit your dog, even if you think this is deserved. Dogs won’t understand this behavior.

Instead, they can just become afraid and aggressive as a result. In fact, most stories in which Pitbull attacks child are caused by the dog feeling fear because of the kid’s behavior.

All canines are territorial animals, and Pitbulls are no different. They will defend their home and protect their humans from anything they see as dangerous. In their eyes, any new person might be a threat.

This is why it’s extremely important to socialize your dog from puppyhood. When a Pitbull learns that new people can enter his comfort space without endangering it, he won’t feel threatened.

They are in pain

Pain and discomfort can make anyone feel agitated. You might not realize your dog is hurting and try to force him to do something he doesn’t want.

Imagine a scenario in which your dog has abdominal pain, but you try to lift him up. The extreme pain he might feel can make him snap at you and bite.

This isn’t done out of malice. Your dog has no other way to let you know to back off.

Some sicknesses can change your dog’s behavior. The most common illnesses that can make dogs aggressive are rabies and liver disease.

It’s crucial to take your dog to the vet if you notice any changes in your four-legged friend’s behavior. What seems like a tantrum might be a much more serious issue.

Most dogs are possessive when it comes to food. If they aren’t appropriately trained, they can turn aggressive if someone tries to take their food away.

Not just that, but overly territorial dogs won’t even allow you to pet them while eating. Food aggression is the most common reason why dogs bite their owners.

Keep in mind that this doesn’t mean that you should focus just on your dog. You have to teach your kids and any possible guests not to touch dogs who are eating. Even a tame dog might snap if someone disturbs him during his mealtime.

Just like humans, anxious or panicked dogs might do something instinctively, without thinking. This usually happens if two dogs get in a fight, and the owner tries to separate them.

A scared or aggressive dog can turn on his owner in a scenario such as this one.

Why Do Pitbulls Attack Children Most of the Time? The most common victims of dog bites are children. Why is that?

They don’t understand canine’s body language, and they won’t notice a dog is agitated. Instead, they will continue to, unintentionally, irritate a dog until he nips at them.

At the same time, dogs are still animals with their wild instincts. All canines have ancestors that used to hunt in the woods.

Predators know that younglings are easy prey, and sometimes these instincts can get through.

This doesn’t mean that dogs will naturally just come towards a kid and try to hurt them. However, they won’t feel as afraid of attacking a child as they would when attacking an adult.

What to Do When Pitbull Attack? Although it is rare for a Pitbull to attack a human, just like with any other dog, this might happen. You should always try to avoid confrontation and know how to stop Pitbull attack if it does happen.

If you see a dog with a tensed body, ears pulled back, stiff tail, and an intense stare, don’t run. Stay calm and back away.

Dogs are hunters, and if you run or turn your back on them, they will chase you. Staying calm is the best way to avoid the attack.

Here are a few more tips on what to do if you fear a Pitbull might attack you:

If the dog ends up attacking you, here’s what you should do:

Before you wonder why do Pitbulls attack, you should understand that they aren’t any more aggressive than other dog breeds.

Their bad reputation results from their history and bad owners who wanted to brag with their dangerous companions.

A well-trained Pitbull will be an affectionate pet who will always want to stay by your side. However, if a Pitbull does bite you, the consequences might be worse.

They have a strong jaws, and their bite can kill a person without too much hassle.

So, are Pitbulls a dangerous breed? The answer is complicated. If a Pitbull bites you, you can end up seriously hurt. So in a way, yes, they are one of the more dangerous dog breeds.

At the same time, they aren’t aggressive towards humans, just misunderstood. It all comes down to the owners and how they trained their dogs.