Do you think about purchasing a corgi? This dog breed has won the world thanks to its cute face and stubborn personality. Many people wonder, are corgis smart pets, or is this just a myth that circles the internet.

Before you get yourself a dog, it would be best to do your research about the breed.

Every future owner needs to inform themselves about the breed’s required diet, health, exercise needs, as well as intelligence.

So, are corgis smart dogs? Let’s dive right in! Corgi intelligence has been a topic of talks ever since the breed became well-known. So, are corgis smart, or are the rumors false?

Cardigan Welsh Corgi has a bit lower ranking, as he is considered the 31st smartest breed in the world. Both of these are very high rankings, and Corgis indeed are intelligent dogs.

But what does this really mean?

How Can You Measure Dog’s Intelligence There are many ways people can determine whether their dog is intelligent. The same goes for corgis.

The person responsible for developing methods for calculating intelligence is the aforementioned Stanley Coren.

He coined the phrase: “obedience and working intelligence” to describe the trials he invented.

His intelligence criteria aren’t perfect, but it’s the best-known way to determine are corgis smart.

Coren asked the obedience trial judges from Canadian and American Kennel Club to ask for statistics.

The parameters he asked for were:

He got the answers from almost half of North American judges. However, he couldn’t measure the intelligence of all breeds.

For him to complete the statistics, he had to have at least 100 evaluations on one breed.

Luckily, as both species of corgi were rather popular, he didn’t have many problems evaluating them. Otherwise, we might’ve not known are corgis smart or not.

Are Corgis Smart According to Coren’s Trials? 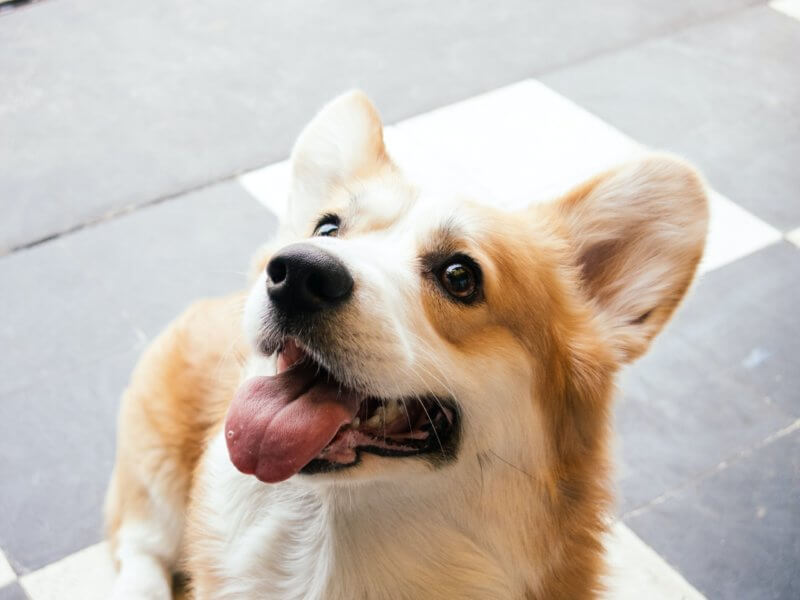 Corgi’s achieved high results in Coren’s trials. Because of this, both Pembroke and Cardigan Corgis fell under the ‘bright dogs’ category.

In fact, corgi’s fall under the very exclusive class of intelligent dogs.

Only 21 breeds got into this category! But what does this really mean?

Both Pembroke and Cardigan corgis managed to learn a new command after just 5 to 15 repetitions. This means that regular corgi owners can teach their dog new tricks in just a few minutes.

For anyone considering getting a corgi, this is excellent news. Also, both corgi species have an 85% success rate when it comes to obeying command after a first attempt.

This makes them very obedient, despite their stubborn nature.

For reference, here are some famous breeds that fall in the same intelligence class as corgis:

How Well Does Corgi Perform Compared to a Regular Dog? First things first, not all dogs are the same, regardless of their breed. However, most breeds don’t perform as well as corgis. This is because corgis are considered to have above-average intelligence.

So, we can say that corgis perform better than most average dogs.

An averagely intelligent dog learns a new command between 25 to 40 repetitions. As we see, corgis are around 65% faster than most other breeds when it comes to learning tricks.

This is perfect if you want a dog who can impress your guests and neighbors.

Average dogs obey a command after the first attempt with a success rate of around 50%. This means that corgis are 70% more obedient than most other dogs.

Taking all this into consideration, it’s easy to see how come corgis are considered so intelligent.

Of course, there is nothing wrong with ‘averagely intelligent’ breeds. In fact, some of the most popular dog breeds fall under this category! This includes:

All in all, this is a pretty fine category, as well.

How Come Corgis Are so Smart?

Coren’s trials aside, there are more features than working intelligence and obedience that decide a dog’s intelligence levels.

In fact, Coren’s tests are just one of three components that make a dog’s IQ.

Still, obedience and working intelligence are two components that are the easiest to measure. This is why most researchers focused on them.

However, we cannot talk about corgi intelligence and ignore the other two factors.

The remaining two parts of a dog’s IQ are:

Both of these are pretty important to decide on whether or not a dog is smart. These two features can be quite tricky to measure.

Despite this, corgis have an excellent performance on all three intelligence dimensions! Why is that?

What Were Corgis Bred For?

Corgi’s history determines their instinctive intelligence. Instinctive IQ is the skill or the ability that people bred the dog for. All dog breeds were created with a purpose.

Breeders ‘designed’ some dogs to be guardians, others are hunters, some are even just companions.

Corgis have a specific purpose that breeders created them for. They are herding dogs, and people indented them for herding livestock. And they are the best dogs for the task!

Their small, elongated bodies without a tail is perfect for life on the field. This way, they can dodge cow kicks. They are very fast, which is a great way to avoid being stomped on.

Not to mention their big ears that help them hear if cattle are in danger! They can round up any livestock even without human training.

This ability requires high instinctive intelligence, and corgis have precisely that.

Their personality shows their intuitive intelligence. They love to make people do what they want, and this pushy personality is very handy in the field.

Corgis will push cattle and force it to go where humans need it to go. In fact, you can see this herding instinct with corgis who have never been to the field.

Excited corgis will nip and bite.

This is most noticeable if you have little children. Whenever they are running around, corgis will nip at their heels. This doesn’t make them aggressive.

It’s just that their instinct gets the best of them.

Of course, you shouldn’t support this nipping behavior. Proper training like swimming is the key to teaching your corgi how to behave around other people, especially children.

Keep in mind that some corgis won’t ever grow out of this nipping habit, though.

One of the things that corgis are most known for is their stubborn nature. They will figure out how to do forbidden things on their own.

Believe it or not, this is a sign of high adaptive intelligence.

Adaptive IQ refers to the dog’s ability to learn new things on his own. To understand does your dog score high on this, just think about changes in his behavior.

Did he learn from the past and teach how to adapt to a new situation?

If he did, congratulation – you have one intelligent dog.

Adaptive intelligence varies highly from dog to dog, even if they are of the same breed. Corgis, however, are mostly very adaptive.

They aren’t known as hard workers, but they are very smart.

These dogs will quickly learn to lean their head sideways if the stick is too wide for the door.

If they are tired, they will show you the shorter route to the house. Don’t even think about hiding their food in a container that isn’t well shut!

They’ll find a way to open it in no time.

All of these experiences are proof of corgi’s high adaptive intelligence. They quickly learn from their past experiences, and they aren’t shy about showing their new knowledge.

Another good example is their ability to know your intent.

When you’re putting your shoes on, you’re going to go outside. If you’re packing the bag, they won’t see you for a while. When you’re holding their leash, they’re going on a walk with you.

There’s no way hiding you’re going on a business trip with such a smart dog!

Intelligent Corgis – Pros and Cons of Having a Smart Breed While owning a smart breed sounds fantastic, it isn’t as perfect as it might sound. Sure, you can quickly teach him new tricks or to be obedient, but there are some downsides.

We’ve covered up some occasions that show what owning a smart corgi is really like.

You should be asking yourself: “Are corgis smart?” but rather “Are they stubborn?” This is another side of the coin that goes with owning an intelligent dog.

Corgis are pretty aware of their intelligence, and they will use it to their advance. Sometimes, they’ll even go overboard with their independence and desires.

If they really want something, they’ll let you know. And if you don’t plan on obeying them, they’ll get it by themselves. This trait can be tough to deal with, especially if you are a new dog owner.

To deal with this, you need to give them proper obedience training. With such a stubborn breed, you must be patient and consistent.

Otherwise, you can be sure corgis will take advantage of any soft spot you might have.

They Are Quick to Learn Bad Behaviors

Just as you can quickly teach them how to behave, they can quickly ‘pick up’ some destructive behavioral patterns.

Once they do teach something, it becomes really hard to make them stop acting this way.

For example, if your corgi has food aggression, it’ll take you months to teach him to stop being aggressive. If they started climbing onto your bed, good luck trying to teach them to stop.

Having a highly intelligent dog can be a blessing and a curse. It’s all up to your skills and determination to show them who is the pack leader.  (source)

In conclusion, are corgis smart dogs? Very much so! They are smart according to every intelligence measurement there is.

They have high scores on Coren’s trials, and they are very adaptive and instinctive. All of this makes them one of the most intelligent dogs in the world.

This, however, has its good sides, as well as quite a few downsides. Corgis are quick to teach new tricks. They can get by on their own, and their stubbornness makes them even cuter.

However, you’ll need a lot of patience dealing with such independent dogs. Sometimes, it’ll seem like corgi’s training you, and not the other way around!

As corgis are one of the world’s most popular breeds, it seems like owners wouldn’t have it any other way.