If you watched some documentaries about lions, you have likely heard that male lions sometimes eat their cubs. This gruesome behavior isn’t something unheard of in the animal world. When it comes to felines, is this something that only happens with lions, or do male cats eat kittens, too?

It isn’t a secret that in a lot of domestic animal breeds males aren’t as good parents as females. Strong paternal instincts aren’t something that pets are known for. However, killing or eating younglings is the next level of terrible behavior. Is there the truth to the horror stories about cats being horrible parents? Do male cats eat kittens or is this just another tale? Let’s find out. 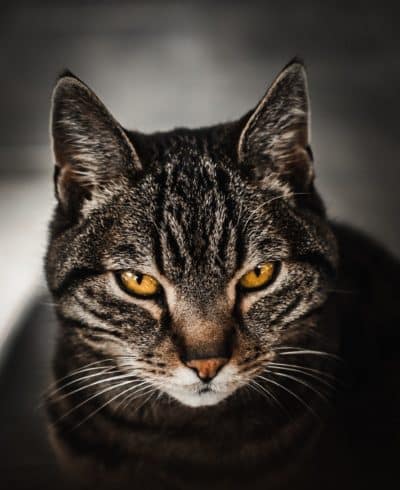 Domestic male felines aren’t really known for being great parents to their kittens. Typically, the most they’ll do is father as many litters as possible, then leave everything to the mother cat. In fact, it isn’t rare that feral male cats will kill kittens, especially if they aren’t the father. While there isn’t much reason for such behavior today, killing kittens is in male’s instincts.

In the wilderness, male cats want to have as much offspring as possible. It’s in every animal’s genetics to want to be the main gene source in the area. Sadly, this includes killing a rival’s offspring. This prevents the rival from spreading his genes and allows the killer cat to advance his genetic agenda.

Males aren’t really known for participating in cannibalism, at least when it comes to their babies. They don’t have a particular interest in eating kittens, except on occasions when there is no other food available. In fact, females are more prone to eating their own babies – but more on that later on.

Of course, not all male cats will do this. Many are known to be very good fathers and even help their mates clean their babies. They can play with kittens and be good company for them. Actually, some male cats are known for bringing kittens home to their owners. This is a behavior that isn’t necessarily common in the wilderness.

Domestic cats seem to have lost some of their wild instincts, as they are no longer necessary. It is rather uncommon for a domestic, even unneutered male to kill kittens, especially their own. This usually happens if a cat’s hunting drive overcomes his parental instinct. Sometimes, this can happen due to kittens’ high-pitched voices, erratic movements, or small size.

This causes the male cat to confuse kittens with the prey. However, this is a rare occasion, and domestic male cats are usually very good with little kitties.

Sometimes, though, accidents can happen. As you probably already know, cats will carry kittens by holding them by the neck. Male cats can do this, as well. The problem arises if the hunting instincts overcome his paternal instincts.

What does this mean? A kitten won’t always stay calm when a male cat is carrying him. They might twitch or try to break free. These movements can remind male cats of the way prey moves once they catch him.

If this happens, the ‘hunter mode’ will turn on, leading to him killing or even dismembering the kitten. In females, this hunting instinct weakens when the kittens are present. However, this doesn’t happen with males, and it is extremely hard to prevent them from seeing kittens as prey.

How Do Male Cats Know Their Kittens? 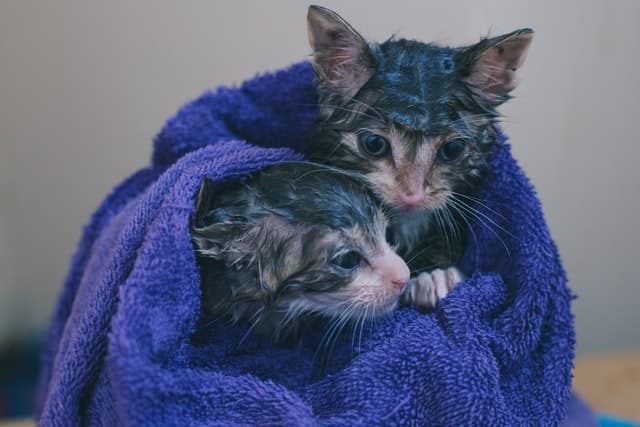 Cats get by with the help of their sense of smell. They determine who is who with their scent, and this lets them know who is in their territory. This also lets cats understand whose territory they are on. Male cats know, according to scent, which kittens are his.

However, this can lead to many misunderstandings. For example, if another male cat leaves his scent on a father cat’s territory, this may confuse him. The father cat might then think that the kittens belong to another cat. This can lead to him abandoning the kittens or even killing them to ensure the female has only his heirs.

Do male cats eat kittens after they’re neutered? If your unsprayed female cat has a litter but they don’t belong to your neutered male cat, should you worry?

While neutered cats don’t have the same instincts as intact males, accidents can happen, although rarely. These felines won’t kill kittens to ensure they are the only male source of genes, but other reasons remain. The most common one is their hunter instinct. If the male cat didn’t get used to kittens being there, he might confuse them with prey.

Kittens look a lot like small rodents that cats love to catch and kill. Also, unfriendly adult cats will attack kittens they don’t know, just like they would do with adult cats.

The only exception to this is if you’ve recently neutered your cat. It takes quite a few weeks, even months, for male hormones to settle down. Otherwise, he still might have his wild instincts to kill any kittens that aren’t his.

Still, most domestic male cats will co-parent, even if they aren’t the fathers. Cats are known to be social creatures, despite the myths. However, this highly depends on the cat’s behavior and attitude. An aggressive cat can kill kittens, no matter the occasion.

How to Protect Kittens from Male Cats? 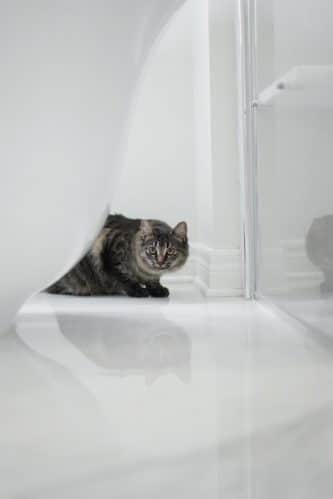 At some occasions, the presence of a mother herself can be enough to prevent the male from killing her kittens. Unlike lionesses, for example, female cats aren’t submissive to males. They’ll have no issues fighting males who might attempt to hurt their kitties.

However, mothers can’t stay with their babies all the time. Also, some female cats are much smaller than males, which might result in them losing the fight with a male.

Keep in mind, though, that most female cats can easily fight off much bigger and stronger animals than male cats. This includes:

And other predators. In other words, for as long as a female is present, kittens should be safe.

Still, there are some precautionary measures you should do to prevent the male from hurting babies.

Will Female Cats Eat Their Kittens?

Now we know do male cats eat kittens, but what about females? Believe it or not, female cats can eat their own kittens more often than males do. This can happen for a few reasons, such as:

If a female cat is a first-time mother and she’s very young, she might not yet have her motherly instincts. This can cause her to neglect her kittens, and sometimes it can end with her killing or even eating them! Because of this, it’s essential to closely monitor your cat when she has her first litter.

When a cat has too many kittens, she might not be able to produce enough milk for all of them. This rarely happens in domestic cats, as they don’t lack food or water such as their wild counterparts. However, in the wilderness or on the streets, cats don’t have as much food. It isn’t uncommon that a mother cat can’t get enough nutrients. This can cause her to lower milk production.

When this happens, the mother cat will eat the only thing she can, and that is some of her babies. She’ll usually eat the weakest of the kittens, one that might not even survive otherwise. While this sounds cruel, she sees this as a necessary sacrifice to save the rest of her litter.

Stress caused by factors such as environmental change might cause cats to panic. [1]

This can cause frantic behavior that may end with her killing some or all of her kittens. Also, stress may cause her to urinate more or eat less, leading to the loss of milk. This brings us back to the previous source of cannibalism in mother cats.

Lastly, cats orient themselves using the sense of smell. A feline’s kittens will smell like her, and this is how she recognizes them. If there is a feral cat with small kittens in your neighborhood, don’t touch the kittens while they are breastfeeding. Your smell can linger on the babies, causing mother cat to abandon or kill them.

Cats are territorial animals, sometimes even more so than dogs. [2]

However, unlike canines, they aren’t prone to killing other adults from the same species. Still, cat fights aren’t pleasant to look at, and felines can cause severe injuries to other felines. When males fight, they’ll aim to chase away the intruder from the territory.

The opposite can happen, as well, and a new male might attempt to take over your male’s territory.

Still, these fights are rarely deadly. Cats aren’t blood-thirsty animals, and they’ll first try to scare away anyone who disturbs them by hissing or even growling. If a fight does happen, it will last shortly and the loser will usually run away.

When you have an aggressive cat that’s never been socialized, don’t force other cats into his space. An adult cat that isn’t friendly with other felines isn’t likely to change his behavior. Don’t bring a new pet such as a kitten if this will stress your adult animal out.

Not all cats are friendly creatures, and they don’t mind letting you know when they want to be left alone. As they aren’t pack animals, they don’t always have the instincts to take good care of other cat’s babies. This leads to the assumption that male cats can be dangerous for the kittens.

So, do male cats eat kittens? While they might kill a youngling for several reasons, female cats are more likely to commit this act. Even though this isn’t something most owners suspect, most males are entirely harmful to the litter. However, accidents can happen, and sometimes instincts do get the best out of your kitty. You should never leave your kittens unattended with a male cat. And if something bad does happen, try not to blame yourself. Nature can be cruel, but this is a circle of life. Still, try to protect the little ones the best that you can.