The reason why they do it is similar to humans. They have derived pleasure from it in the past, so they continued doing it. Most cats will do this less and less as they mature, and some might stop doing it entirely. We’ll explain some causes of cat hypersexuality, and what you can do to help your felines.

Cats can get stressed out, just like we do. They can feel bothered for many reasons, such as:

Try finding out if something changed in your cat’s environment that might be causing an issue. Be there for your cat, soothe him and dedicate some time to him. Keep in mind that compulsive behavior can be a sign of some more severe neurological damage. It is essential to contact your vet whenever you notice your pet behaving strangely.

If you go to your vet because your cat masturbates too much, expect to answer a lot of questions. Your vet will also take many preliminary tests to rule out any simple causes behind your cat’s behavior. In the end, they might even order a scan.

It is as if cats with this tumor forget what they should hump. Also, a synthetic amino acid, p-chlorophenylanine, can cause cats to develop hypersexual behavior.

What to Do if Your Cat Masturbates too Much 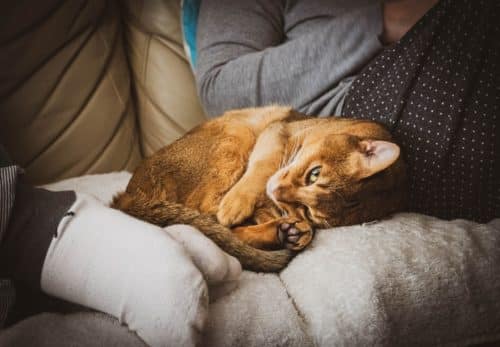 Of course, this is as long as the behavior doesn’t become too frequent. Once it does, you should try to prevent it.

Overgrooming can cause inflammation or irritations, and this can hurt your cat. Below are a few things you can do to try to unlearn your cat from this annoying behavior.

In fact, this is one of the mistakes that might cause your cat to develop compulsive behaviors. This is why you don’t want to give unnecessary attention to your cat. Don’t turn an occasional habit into a nasty compulsion.

If your male cat is still intact, this is a good time to consider neutering him.

Testosterone is the cause of sexual behavior in all male animals, and cats are no different. If your cat masturbates too much, you should neuter him. Neutering also has many other benefits, such as:

Sometimes all it takes is for him to take out that excess energy by playing or running around. Also, a behavioral therapist might be able to correct your cat’s ‘wrongdoings’ much faster than you could. They have trained for their job, so they know what they’re doing.

Take Your Cat to the Vet

As we’ve established, sometimes the cause of this behavior might be some medical condition. If this is the case, no one can help you but a veterinarian. In fact, we would suggest you go to your vet first if you notice some strange actions from your cat.