Catching mice or rats is something that comes naturally to all cats. Everybody knows that. What about your canine friends? Do dogs eat mice, or is this something reserved for felines only?

Believe it or not, dogs can catch and eat mice. While they aren’t as great hunters as cats, sometimes they can chase rodents and even eat them afterward. Should you let them do this?

In this article, we’ll try to answer why do dogs eat mice and should you be concerned if this happens.

Why Do Dogs Eat Mice? If you wonder why do dogs eat mice, the answer might be more simple than you think. Dogs are known to eat whatever they can.

One might even say they are true scavengers. They won’t care what they eat, as long as they get food inside of them.

This doesn’t necessarily mean they are hungry. Dogs simply love to eat and will eat even if they are full.

In fact, people bred some dogs specifically for pest control. These dogs are more likely to kill and eat mice than others. Breeds that are natural mousers include:

As you can notice, all these breeds have one thing in common: they are small to medium in size. While larger dogs are good guardians, their size is a disadvantage when catching small rodents.

To mouser breeds, catching mice is in their instincts. However, not all dogs will eat a mouse they’ve caught.

Hunting presents enough joy and adrenaline for them, and they won’t get any satisfaction from eating their prey.

This is a better option for both you and your four-legged friend.

Is Eating Mice Safe for Dogs? 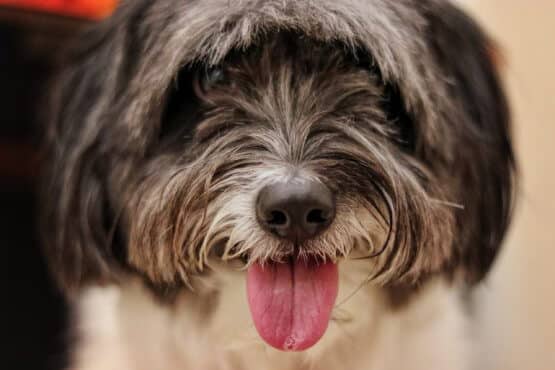 While eating rodents sounds like a natural thing for dogs, you should really prevent your pooch from doing so.

Eating mice can have several consequences; some of them might even be deadly.

Not to mention they can get in serious trouble if the mouse or rat died from poisoning!

If you’ve wondered can dogs die from the mouse they’ve eaten, you should understand that this, too, can happen.

Can Dog Get Parasites from Eating Rodents? When dogs eat mice, can they get infested with parasites? Rodents are common carriers of several parasites that can endanger your dog’s health. In fact, dog diarrhea from eating raw animal is very common. If they get it you should include special food in their diet.

Parasites can easily get into canine’s intestines through live prey. Because of that you should do all you can to prevent your dog from eating any rodents, mice and rats included.

Below are some common parasites that dogs can catch if they eat mice.

Mice are a common transmitter of roundworm larvae. Roundworms, or Toxocara canis, are among the most common parasites that can infest both dogs and cats. They eat the content from your dog’s intestines. In other words, they’ll eat the food your dog ate.

A dog infected with roundworms will lose weight, as these parasites eat a portion of his nutrients.

If your dog eats mice infected with roundworm larvae, these parasites will inhabit his guts.

There, the larvae will develop into worms that can grow to be four to six inches in length.

When a dog is infected with roundworms, you can notice them in his feces or vomit.

They are long and white, and the chances of you missing them are very slim.

While some canines won’t show any other symptoms, many will. Some of the common signs of roundworm infection are:

It’s important to take your dog to a vet if you suspect he has contracted roundworms.

People who don’t know do dogs eat mice won’t ever realize this might be the cause.

Tapeworms, or Dipylidium Caninum, are another parasite that can cause trouble for your pooch.

While the common culprit for these worms is fleas, they are also transmitted through eating raw rodents.

Mice and rats are hosts for tapeworm larvae, which will infest your dog who ate either mice or their poop.

Tapeworms can grow to be anywhere from four to 28 inches in size!

As tapeworms grow older, their segments will break off.

You can see these segments inside a dog’s feces; they’ll look like white rice in his poop. These segments are filled with tapeworm eggs that wait for a new host to eat and transmit them.

Despite their size, tapeworms aren’t as harmful to dogs as roundworms. They will rarely make your dog ill.

However, other than segments in dog’s feces, common symptoms of tapeworms are:

If you notice these symptoms in your dogs and you see tapeworms in his feces, it’s time to get dirty.

You need to take your dog’s stool to the vet for the proper diagnosis. Tapeworms aren’t likely to disappear on their own.

Another parasite that can infest your dog after eating a mouse is toxoplasma.

While toxoplasmosis is an illness commonly connected with cats, toxoplasma can infect dogs, as well.

Toxoplasma won’t make cats ill – but it can be harmful to pregnant women who come in contact with it. Luckily for you, toxoplasma can hardly transfer from dog to human. Unfortunately for him, it can make dogs very ill.

Mice and rats that have contracted toxoplasma develop toxoplasmosis cysts in their muscles. When a dog eats an infested rodent, toxoplasma spreads to his inner organs. An infested dog can have various symptoms, including:

If your dog has a weakened immune system, toxoplasma can cause serious harm. It’s important to contact your vet as soon as possible if you suspect your pet has this parasite.

Can Dogs Get Poisoned from Eating Dead Mice? We’ve already explained why some dogs hunt mice. However, do dogs eat mice that have already died prior to this?

Truth is, your dog will be safer eating a mouse he caught and killed. As canines are much bigger than rodents, many owners don’t know is mice poison safe for dogs. Believe it or not, despite the size difference, rat poison is extremely dangerous for your puppy.

Whether your dog ate mice poison directly, or if he ate a poisoned rat, consequences could be the same. That poison is made to kill anyone who eats it, whether it is a rodent or an unsuspecting Lab. In fact, your dog can get poisoned even if he eats mouse poop. The poison is so strong it can stay in rodent’s feces for days or weeks.

A big problem with mouse poison is that it won’t show any symptoms until it’s almost too late. Signs of poisoning depend on the type of poison they ate. We’ll mention some of the most common toxins and their symptoms below.

Long-active anticoagulants, or LAAC, are the poison that people usually use for rat poisoning. They will prevent rodent’s blood from clotting, thus inducing internal bleeding. The same can happen to your dog who ate an intoxicated rat. Signs of LAAC poisoning include:

Unfortunately, it can take up to five days before any symptoms show up. This can decrease the chances of your dog getting out of it unharmed. However, treatment of this intoxication can be fairly easy, depending on the LAAC type and your dog’s age and health.

Vitamin K1 is the most commonly used medication for this poisoning. Just make sure you take your dog to the vet, who will give him the proper dosage.

Some of the more dangerous poisons are based on aluminum phosphides and zinc. They are harmful not just to mice and pets but to humans, as well. These phosphides release poisonous gas in the stomach, causing intoxication. Signs of poisoning include:

If you suspect your dog ate a mouse who died from phosphide poisons, you shouldn’t feed him. This can only worsen the condition. In fact, there is no antidote for this poison. Because of this, it’s essential to take your dog to the vet as soon as possible. Your vet will probably give him antiacids to reduce the amount of gas.

Keep in mind that inhaling this poison is dangerous to humans, as well. Don’t try to induce vomiting in your dogs at home.

If he does vomit, ensure to open all the windows and ventilate the room. You can become sick if you breathe in just a small amount of phosphides.

Bromethalin is one of the most dangerous poisons that is commonly lethal to dogs. It causes cerebral edema, which is a dangerous condition that leads to brain swelling. The swelling stops the brain’s blood supply, and without blood, the brain doesn’t get any oxygen.

This can lead to death.

The effects of bromethalin poisoning are long-lasting, and even small dosages are very dangerous. Signs of poisoning include:

Symptoms can appear two to 36 hours after poisoning. It would be best if you took your dog to the vet immediately. He will probably have to stay in the vet’s office for a few days. There, the vet will probably give him activated charcoal and other specific meds. Without adequate treatment, your dog will die.

Cholecalciferol is the most dangerous type of mouse poison on the market. It has high levels of calcium, vitamin D3, and phosphorus, and dogs who eat it experience kidney failure. Symptoms include:

Unfortunately, most owners won’t think these symptoms are something to be concerned about.

However, kidney failure can happen in just a day or two after ingestion, leading to permanent damage. If you take your dog to a vet quickly enough, there is a chance of recovery.

The treatment is very expensive, and there aren’t any guarantees that your dog won’t have some consequences.

Do Dogs Eat Mice Poop, and Will They Get Sick from It?

As we’ve already mentioned, dogs are scavengers. There are high chances they will eat mouse poop if they find some.

Luckily, the chances of your dog getting sick from mouse poop are very slim.

While he can get poisoned if the mouse he ate was poisoned, this doesn’t happen too often. There are small chances he might get leptospirosis, a bacteria found in mice’s urine and feces.

Other than that, your dog would need to eat a large amount of poop to end up feeling sick. While we wouldn’t recommend it, eating mouse poop is safer than eating dead mice.

Many owners wonder do dogs eat mice and can they get sick from them.

While it isn’t common for dogs to hunt, kill, and eat mice, they will often eat dead rodents. This can be very dangerous, as you never know what caused these mice and rats to die.

Dogs can get poisoned from eating mice who died from rat poison. Also, dogs can contract several parasites that mice spread.

Luckily, the chances of your dog actually getting sick after eating mice are very small. If your dog eats a mouse, he’ll probably be fine. Still, you should monitor him for at least 24 hours after his unfortunate meal.

Take him to the vet if you suspect he contracted parasites or, more importantly, that he is poisoned. Fast reaction is the key to recovery.