How many English bulldog tail types are there? The bulldog breed has several breeds, and the English bulldog will be one of them. Although these other bulldogs, like the American bulldog, may have different types, the English bulldog has no other types. You will find only one kind of English bulldog. You may, however, categorize these dogs according to their body features, like tails.

In this regard, let’s look at the different types of tails in the English bulldog. They may come in different shapes and sizes, even from the same litter. These tail sizes and shapes get used by many people to tell English bulldogs apart. The tail exists as a short tail and may not get docked as some people may get tempted to think.

Docking bulldog tails may get you on the wrong side with the law of animal rights since it became illegal both in the US and UK. If these two don’t practice docking, I bet it will be so in most other countries, especially where they have ties. So, if you see the corkscrew or stubby tail in an English bulldog, it will be natural.

What are the English bulldog tail types? The explanation behind the English bulldog with a long tail Just like things happen in the world, you may have individuals with different characteristics from other similar individuals. This way, you may get a pure breed English bulldog with a long tail. This scenario has a slight chance of happening, but it does happen. However, we may trace it to the first breeding attempts to change the bulldogs from bull-baiting to other friendly bulldog types. This attempt was good, but it gave birth to the various disorders [3] associated with the English bulldog and different bulldog tail types.

What are some of the English bulldog tail problems? As we have seen various English bulldog types depending on their tail sizes and shapes, we also need to understand that these tails may develop health problems prompting their removal. The corkscrew tails will be highly associated with most English bulldog type tail problems. Screw tails happen if there happens to be an abnormal development of the tail bones.

Although this may be a genetic abnormality, people have also deliberately introduced this possibility because they love the shape of this tail. The complications associated with the screw tails include:

This condition comes about when the dog flushes its tail with its butt. The movement of the tail causes friction between these two places prompting an inflammation. The inflammation gets infected with bacteria due to the warm conditions between the tail and butt region. The infection may get treated with antibiotics but tend to recur for the same reasons.

Thoracic Vertebral Canal Stenosis (CTVC) [4] – in this malformation, the vertebrae get malformed and squeeze the spinal cord in return. This condition mainly affects young male English bulldogs and contributes to other health issues.

How to fix the English bulldog tail problems?

Antibiotics may help relieve the dog in the case of spinal Bifida. However, antibiotics don’t provide a lasting solution since the infections tend to recur. Therefore, for the two conditions, the ultimate medical solution gets achieved by surgically removing the screw tails.

This surgery, scientifically known as caudectomy [5], helps fully cater to the discomforts and health problems associated with screw tail in the English bulldog type.

How should you care for your English bulldog’s tail region? 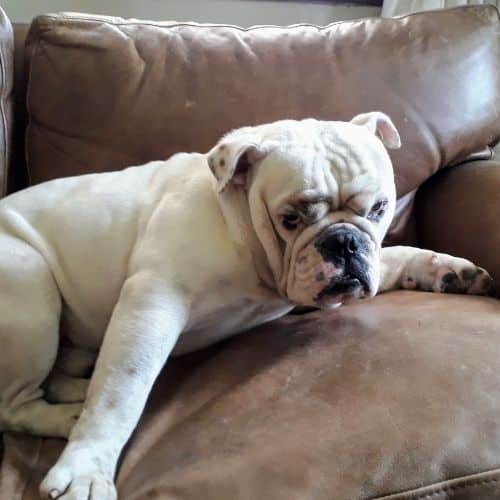 Due to the above concerns over the corkscrew tail, you need to properly take care of your English bulldog’s tail region. Sometimes, these infections that affect the screw tail region may get avoided. In this regard, we provide you with a few tips that may help keep your four-legged friend infection-free.

Is it possible to find old English bulldogs with a tail? We have seen various reasons that result in tail removal in most bulldogs. It will not be abnormal for the English bulldog type to find no old English bulldog with a tail, especially if they had the screw tail.

The tails don’t pose a significant health risk when they are littered. But as these dogs grow and mature, environmental factors play an essential role in their lives. They may tend to get more sweaty under their tails as they gain weight. This sweating may trigger infections in most of the screw tailed English bulldog types and hence get their tails surgically removed.

So, yes, you may find old English bulldogs with tails, but you may also get old ones without tails.

Is it legal to cut an English bulldog tail?

Tail docking has become illegal in most countries of the world. Docking involves a medical procedure where you cut off a dog’s tail, either short or completely removed. Initially, working dogs had their tails docked to limit distractions. When taxing on non-working dogs started, some people could dock their docks to avoid the taxes.

As times changed, docking was illegal in most countries, especially if you needed to dock your dog for cosmetic purposes. You will only be allowed to cut your English bulldog tail for medical reasons and if your veterinary suggests so. As we have seen, this procedure gets carried out mainly in screw tailed English bulldog types. The tail gets cut to avoid health issues associated with bacterial infections [6].

Is it dangerous to cut an English bulldog tail? The dogfighting sport though illegal, makes the participants dock their dog’s tails using crude methods. The dog may die if an infection occurs since they don’t put them on medication as per ASPCA report [7]. Due to the cruelty of the sport, it should be condemned and stopped.