We all know dogs would eat anything that falls under their noses. This is why you may end up asking yourself: can dogs eat horseradish?

This spicy condiment is a favorite of humans due to its intense taste. You can experience its tangy flavor with your mouth, nose, and even your sinuses! But is it suitable for your four-legged friend?

Are you reading this because your dog has eaten some horseradish? Don’t be too worried, just check the facts and watch the dog for symptoms.

Why would your dog eat horseradish? 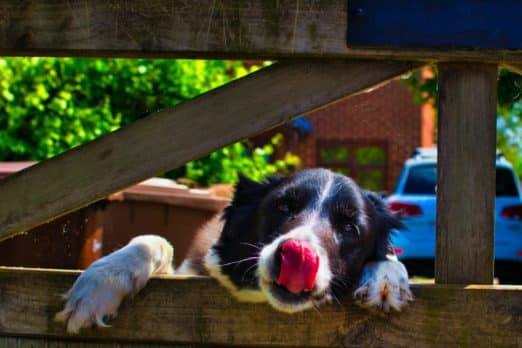 While no responsible pet owner thinks of intentionally feeding their dog with horseradish, it can happen.

Imagine you were preparing a horseradish sauce and you dropped some of it on the floor. Your dog could pass by, see the horseradish, and gobble it up before you have a chance to prevent it. Next thing you know is you are frantically searching on Google ‘Can dogs eat horseradish?’ and hope it’s OK.

Also, if your dog is fed with leftovers, its food can contain a variety of ingredients that are harmful to dogs. Yesterday’s delicious barbecue leftovers may come with some sauces that are tasty for humans but irritating for dogs.

Another possibility is someone offering horseradish to your dog due to simple ignorance. As a dog owner, you are concerned about healthy nutrition, but friends and family may not be aware of it.

If you have a garden where horseradish can be found, keep an eye on your dog. It may dig up things to eat and have some horseradish as a result. The good news is that horseradish that has not been shredded is less spicy. However, consider building fences around dangerous plants and vegetables in your garden to keep your pooch safe. And your garden too!

Last, but not the least, your dog could beg for inappropriate food, including horseradish. You may be persuaded by those puppy eyes, but regret it later when the dog develops nasty symptoms.

Some dogs like to eat horseradish, but many others don’t. You don’t know if they will get it voluntarily until they have a chance to do so.

What does horseradish contain?

Horseradish is a vegetable from the Brassicaceae family. Its cousins are Brussel sprouts, cauliflower, and broccoli.

The part that is consumed the most often is its pungent root, but horseradish leaves are also edible.

Horseradish can be prepared at home but is also readily available at the grocery store. It can be used as a condiment in dressings and as the main ingredient for horseradish sauce.

A tablespoon of horseradish contains:

Small amounts of micronutrients such as calcium, potassium, magnesium, and folate;

Isothiocyanate, the volatile compounds responsible for horseradish’s pungent aroma. The compound is released by grating the horseradish root and can be tamed by adding vinegar.

Horseradish is used as a condiment but also as a natural medicine. According to some sources, this plant may have the following health benefits to humans and possibly to animals.

The substances in horseradish that may protect you against cancer are glucosinolates and isothiocyanates. Apparently, they inhibit the growth of cancer cells and contribute to their death. The cancers that horseradish may prevent are colon, lung, and stomach cancer.

Antioxidants in horseradish such as sinigrin can restore the damage caused by free radicals.

The pungent compounds in horseradish could fight a variety of bacteria, such as E. coli, H. pylori, and Salmonella.

Isothiocyanates were shown to prevent the growth of four types of fungi that are harmful to human health in a test-tube study.

The burning sensation caused by horseradish makes the plant a remedy for colds and breathing issues. Research has shown that supplements containing dried horseradish was effective in treating acute sinus infections and bronchitis.

Now it is easy to understand why you may want to include horseradish into your diet. But putting horseradish on your table also means it could be ingested by your dog. In spite of the health benefits, this plant could do more harm than good to dogs.

Is horseradish toxic to dogs?

Horseradish is not poisonous to dogs. None of its compounds are toxic to pets.

Considering its health benefits, you may be tempted to add this plant to their diet.

The fact is horseradish is not recommended to dogs, as it causes irritation to their digestive, respiratory, and possibly urinary system. So, it is not a good idea to let them eat horseradish.

Horseradish can be irritating for humans as well, but the reaction can be worse in dogs. Unlike us, pets are not used to eating spicy foods and their gastrointestinal tract can be more sensitive.

Not just the root of the horseradish plant is irritating to dogs, but also its leaves. Even if you cook the leaves, they still have a trace of spice that can harm your dog.

The reaction can be worse if your dogs is allergic to horseradish, in which case it can become very ill. You will have to take a trip to the vet and the whole event can be quite traumatic. Better avoid unnecessary pain by keeping your dog away from irritating foods.

Unpleasant symptoms that horseradish may cause in dogs

Some pet owners are afraid that horseradish could kill their dog, but this is not the case.

If your dog has accidentally ingested horseradish, it may experience some negative reactions such as:

They should all subside after putting the dog back on a healthy diet.

Should you let your dog have horseradish?

The answer is no.

There is no good reason to allow your dog to eat this food. Dogs thrive on specialized diets consisting of protein, fat, and small amounts of carbohydrates. They don’t need spices and neither ingredients that could irritate their digestive system.

Moreover, dogs can have an allergy to a variety of plants that are not part of their ideal diet. Horseradish can be one of those foods that trigger an allergic reaction in your dog. Symptoms of an allergy include hives, swelling of the face, itchiness, and sneezing.

If your furry friend has had some of it, keep an eye on them to make sure they are doing fine.

Is it more dangerous to puppies?

Puppies have extra reasons to refrain from horseradish and other spices. Their stomachs are more sensitive and they should avoid ingredients that are very spicy. Chili pepper and horseradish should never be fed to puppies, especially those under three months of age.

Puppies ingesting horseradish can experience negative reactions such as severe pain and indigestion.

Even if some ingredients are known as toxic, urban myths and old wives’ tales may cause you to try them. Here are the most common myths related to horseradish:

Horseradish is good for dog’s cough

Many people think that horseradish can cure a dog’s cough, but vets advise against this cure.

The explanation behind this belief is horseradish being used it to treat respiratory ailments in humans. Horseradish is also a traditional treatment for urinary tract infections, rheumatism, colic, sciatic nerve pain, gallbladder disorders, and intestinal worm in children. However, there is no scientific proof to support these claims.

If your dog has parasites, ask for expert guidance from a vet. Such conditions must be treated immediately with effective antiparasitic substances. Even if there are some natural cures against worms for dogs, horseradish is not one of them.

Your dog can become blind after eating horseradish

This myth has probably begun because spicy ingredients can burn your eyes.

However, there is no record of dogs going blind after eating horseradish.

Vegetables you can feed your dog with

If you want to give your dog vegetables, horseradish is not the best option. Some more appropriate vegetables for dogs are:

Adding a small number of vegetables to your dog’s diet ensures benefits such as:

Vegetables contain a variety of nutrients such as protein, lipids, carbohydrates, fiber, vitamins, and minerals. Some of these compounds are not found in meat and have the role of balancing the dog’s diet;

Some vegetables help your dog to stay hydrated, such as the cucumber which is 96% water. A dog that is only fed with kibbles will likely suffer from dehydration;

They have a variety of health benefits. Phytonutrients in fruits and vegetables can kill cancer cells, ensure gut health, reduce inflammation, and keep the dog’s liver healthy.

Your dog will benefit a lot from eating vegetables, except from onions, legumes, and avocado, which are toxic to canids.

Small amounts of horseradish may not hurt your dog, but this food should be avoided. When ground in condiment or sauce, it can irritate your dog’s digestive system.

Can dogs eat horseradish? Considering that dogs should be fed a specialized diet and not human food products, the answer is simple. Do not feed your dog horseradish! But if it has accidentally ingested a small amount, don’t get too panicked either. Keep your dog under observation in case symptoms appear.